“Your child has the physical skills of a newborn,” is never something a parent of a 1 year old wants to hear.

Given our daughter’s many diagnoses, it perhaps would have been justifiable to give up and accept what many of the experts were describing as a life of limits. A life of can’ts. However, in our case, with a lot of work and determination from many people, 12 years later, our daughter has become a rhythmic gymnast and a dancer. Erin’s current reality would not be possible if we had accepted her original prognosis.

Erin was born 8 weeks early with Down syndrome and just about every physical complication that could come with it. She had 3 major surgeries in her first 6 months and spent almost half of her first year in the hospital. When she was cleared for Early Intervention at 6 months, we began working with Developmental, Speech, Occupational, Physical, Music, and Swim therapists along with a nutritionist. She also took a weekly inclusive music class.  We immersed ourselves in Signing Time videos, and Erin had an age appropriate vocabulary—with sign language being her first language. She used an NG tube for the first 11 months of her life. She and her team worked hard. Her siblings were also expert play therapists and creatively included Erin in every activity they could. Shortly before her third birthday, Erin transitioned to the school based Early Childhood program, and a hospital based Physical Therapy program, using a walker and crawling. She was able to first walk in swim therapy with the buoyancy support.  One week after having ear tube surgery and with a candy reward system her sister devised, Erin walked for the first time on Halloween, just before her third birthday.

Sometimes the most amazing things become life changing break throughs. Looking back, we had two of those break throughs. Erin’s Aunt and Uncle sent her a rhythmic ribbon for Christmas. Nothing fancy, but Erin would play with the ribbon for hours. She would put the song, “Let it Go,” on repeat and dance and dance. I began searching for opportunities to develop this interest and found that Special Olympics offered rhythmic gymnastics. With the help of her PT at the time and her sister the dancer, Erin began applying all she learned into an athletic framework. Having mastered crossing the midline at a younger age, we hadn’t worked on it much. That is until her ribbon routine called for a figure 8. What her sister and I thought would be easy became a complex motor planning exercise months in the making. The advantage of the Rhythmic Gymnastics framework was that, while therapy isolated and made it difficult to attend extracurricular activities, a recreational based model provided socialization, confidence building, and added a skill development. She moved from being a patient to a performer. She then became involved with Unified Sports, which is an inclusive model, gaining peer modeling and socialization. This transition to a recreational based program gave her a chance to perform with her friends at a Special Olympics Gala. Her years of PT work allowed her to overcome her physical challenges and use her grace and strength to show others the possibilities.

The second break through for us came when a service dog named Cassie joined our family. At the time, Erin was using her hard-earned physical therapy work to elope. Cassie would alert us if Erin was headed out the door. Erin really did not appreciate the sensory overload of having a dog bark at her and stopped eloping within 3 or 4 months. We also trained Cassie to track Erin. This gave us great comfort and playing hide and seek with a dog was a wonderful activity for Erin and her friends. Erin also helped train Cassie, which provided fabulous leadership and speech opportunities. Cassie was a great reinforcer of ending consonants, as in “sit,” “down,” and “shake.” Cassie was great support for 9 years, taking us for walks, playing ball, and being a loyal friend. She also taught us about saying goodbye this week, as she passed over the rainbow bridge, Erin insisting she be by her friend’s side, as Cassie has been by Erin’s side all these years. 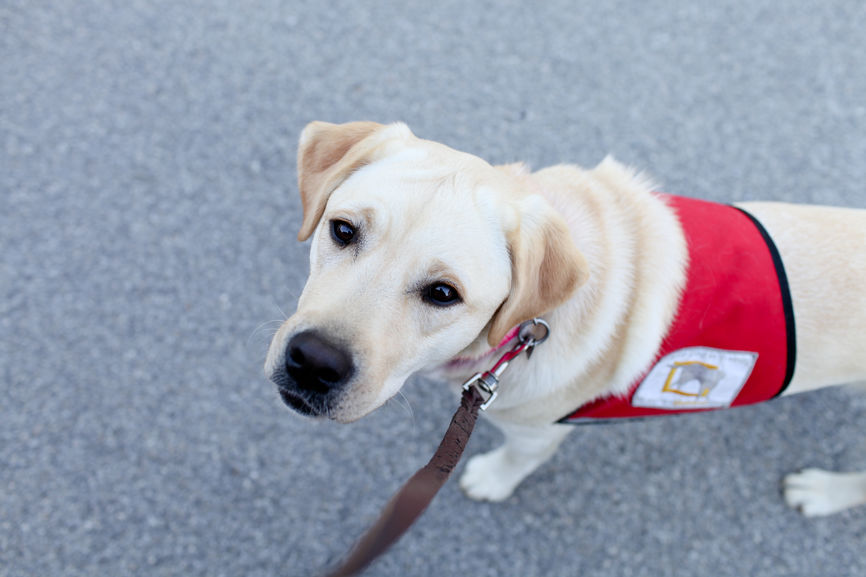 Image Description: A service dog looks soulfully at the camera.

Our other animal partners have been the horses at the Hanson Center Therapeutic Riding Program. Horse back riding is not only good for core strengthening, but it provides a valuable connection to a beautiful creature.

To continue our transition from medical based PT to life-long recreational based exercise, we have begun working with Angela Rodriguez, owner of Kines Training and Coaching. As Angela says, “Exercise gives you confidence, makes you strong mentally and physically, makes you self-sufficient, and helps you handle every day life.” These are things I strive for myself and wish for all of my children. They are also key for achieving joy regardless of ability. Erin is currently working on yoga with Angela, improving balance and strength. The two and Erin’s sister are also working on breathing to help with focus. “Breathing brings back the focus and supports regrouping and changing your reaction,” Angela said.

Life-long fitness is much more effective when people find and do what they love. For children with special needs, doing this may require a medically-based therapy program to develop skills and strength needed to move into recreational-based programs. Therapists working with Special Olympics and other programs can help their patients continue to receive benefits long after treatment has finished.