Letter From Our Founder

We are excited to share our first newsletter of the year. Last year was a great year for us with many big things that happened. We officially launched, Mandy Harvey inspired us with her words and song, we raised money to help others and continue to grow.

This year will be bigger and better yet. We have many exciting things happening we can't wait to share with you. But until then, we will continue to inspire, provide resources, support and knowledge to all of you.

This month we are looking deeper into the Americans with Disability Act (ADA). Before disability legislation was passed, life for people with disabilities was challenging. People had to navigate society without any physical, architectural, employment and transportation accommodations. There was no accessibility to restrooms, housing and transportation. Difficulties with note-taking in schools and employment settings affected achieving. In our featured article, Marilyn Saviola and Marca Briston, two influential advocates for disability legislation, are discussed in leading the movement for the passing of the American with Disabilities Act on July 26th, 1990 by President H.W. Bush.

Article of the Month

Before The Passage of the ADA 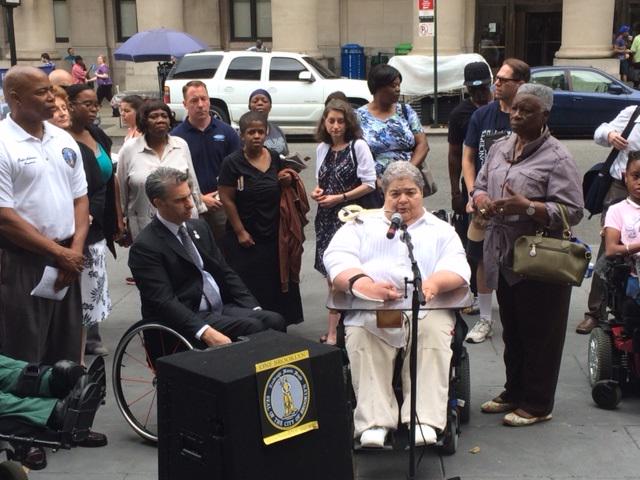 Reading the New York Times’ obituary of Marilyn Saviola recently (December 1, 2019) made me remember what life was like before the passage of the ADA, the Americans with Disabilities Act, in 1990. Ms. Saviola was one of the leaders of the movement in New York that lobbied and marched for the passage of the passage of legislation that would remove physical, architectural, employment and transportation barriers that prevented those with physical, cognitive, sensory and neurological differences from full participation in society.

Tamara Dembo, Ph.D., a psychologist, wrote about such barriers as early as 1973.* She noted at that time that

properties of the person, but are in large part due to the feelings and behaviors

of other people and the rules and regulations of the outside world, the

The world in which handicapped people live is constructed by nonhandicapped

people for non-handicapped people, with little consideration of the needs of the

Ms. Saviola incurred polio when she was 10 years old, in 1955, the same year that the Salk vaccine was introduced. What happened to her afterwards illustrates the points made by Dembo and was typical of life before ADA. After spending time in an iron lung, she required a respirator to breathe and was sent from the acute care hospital to a long-term care hospital for people with chronic disabilities. When she returned to live with her parents; they lived in a two-story house and she could not negotiate the stairs. When she became too heavy for her parents to carry up or down, she was so socially isolated that she decided to return to the long-term care hospital where she had a peer group and would have greater mobility. She finished high school at the hospital which had a tutoring program for teaching the patients, and she was accepted to Long Island University. At first, she took classes remotely by speaker phone and then took classes at the LIU Brooklyn campus and obtained a BA and then a Masters in Vocational Rehabilitation at New York University. Since there were no accessibility laws, she could not use the library or restrooms at her universities because of physical barriers and could not use public transportation. During that time, she and many others realized that no changes would occur in accessibility of transportation, buildings, bathrooms, offices , jobs etc. unless people organized, protested and contacted lawmakers.

Marca Briston, a nurse in Chicago who became paraplegic at the age of 23, eventually came to the same conclusion as Ms. Saviola. While attending a conference in Berkeley, California she was amazed at the degree to which that city had made itself so accessible to those with physical differences. The city had curb cuts, accessible buildings and bathrooms and the city buses had wheelchair lifts! She later wrote, “No longer did I see curbs or stairs or inaccessible buses and bathrooms as a problem around which I needed to navigate. Rather, I saw them as examples of societal discrimination and I felt a responsibility to get involved to help people with disabilities, in Illinois and beyond.” She, like Ms. Saviola and many others across the country became activists. She lobbied senators and congressmen, others picketed, jumped on bus steps from their wheelchair and stopped the municipal buses from moving, lectured and publicized their situation and, as Ms. Briston said: “This ragtag army of people who couldn’t see, hear, walk and talk did what everyone said couldn’t be done. “We passed the most comprehensive civil rights law since the passage of the 1964 Civil Rights Act.”

The ”ragtag army” was comprised of people with various differences who became aware that the prejudices and obstacles that they had endured were modifiable if required by law. Those who had visual limitations should not have to deal with not knowing what floor an elevator was at or not being able to see a voting ballot, people with cognitive or sensory limitations should have a notetaker when taking a college course, a disability should not preclude going to college or getting a good job or living in buildings that had no architectural barriers. Architectural , academic and vocational modifications would open the doors for those who had been kept out by ignorance and discrimination. They challenged centuries of beliefs about those with differences and after much lobbying, education and protests, they won when President George H.W. Bush signed into law the American with Disabilities Act, on July 26, 1990.

How the ADA Helped Me

My name is Jane and I was born in Chicago. Soon after my birth, doctors realized I had cerebral palsy.   My CP resulted in physical and cognitive deficits. I have a right arm weakness which prohibits me from doing two-handed tasks. My attention deficits, slower processing speed, and problem-solving skills affect my academic and vocational  performance if accommodations are not granted.

The Americans With Disabilities Act (ADA) played a crucial role in my education. Because of the ADA, I was able to graduate from high school, college, and graduate school. Having my deficits did not make excelling easy. I had to work twice as hard as the typical student without a learning disability and I had to be pretty resourceful to get around my one-handedness in school and graduate training.