Before I was even born, my body was already covered by wounds that are easily mistaken as third-degree burns. Before I was able to enunciate my name, I had to go through surgeries and daily bandage changes that were tremendously painful. All this is because I have a life-threatening skin condition called Epidermolysis Bullosa (also known as EB).

Image description: Ariana as a young infant, smiling for the camera.

EB causes the skin to blister and wound very easily, so much so that in utero and during birth infants can sustain life-threatening injuries. Severe scarring occurs, which can lead to difficulty eating, breathing, and seeing (among other things). Sometimes wounds cause the limbs to become shaped in anomalous ways or the digits (such as fingers and toes) to fuse together. It is a genetic condition which often causes life-threatening complications like squamous-cell carcinoma, as well as severe chronic pain, and debilitating injuries.

Though rare, EB has taken the lives of many, including some of my very close friends. There have been many days that my doctors thought that I wouldn't make it. Unlike most EB patients, though, I am still here nearly 20 years later completing my college degree. This is something that most EB patients are never able to accomplish due to the physical limitations and immense pain we go through every day.

I am not able to hide my condition; I don’t have the choice of whether to share it with others. My appearance is so captivating to the eye that anyone who looks at me will notice my difference. To be honest, this can be as challenging as the physical pain. Continuous wounds are overwhelming, but the stares, questions and assumptions people make about this condition are even more challenging.

We all know that college is a JOURNEY. College is the place for an individual to grow, find purpose, and gain skills. Typically, the college student worries more over getting the classes they need than what others may think about them or if they’ll be accepted. Not me.Frankly, I was scared to go to college because I had been traumatized by my previous experiences in school. Walking around campus or into a classroom could be a nightmare for me. I feared that others would ask me “what happened to you?!” instead of “what’s your major?”

I feared that others would ask me “what happened to you?!” instead of “what’s your major?”

I also worried if college would be worth it for me. After graduation, would I even stand a chance of being hired? Would companies really hire someone with scars, bandages, and a wheelchair, even if she had the skills for the position? Would I be able to handle the daily bandage changes, bad pain days, and doctor’s appointments alongside college-level academics? 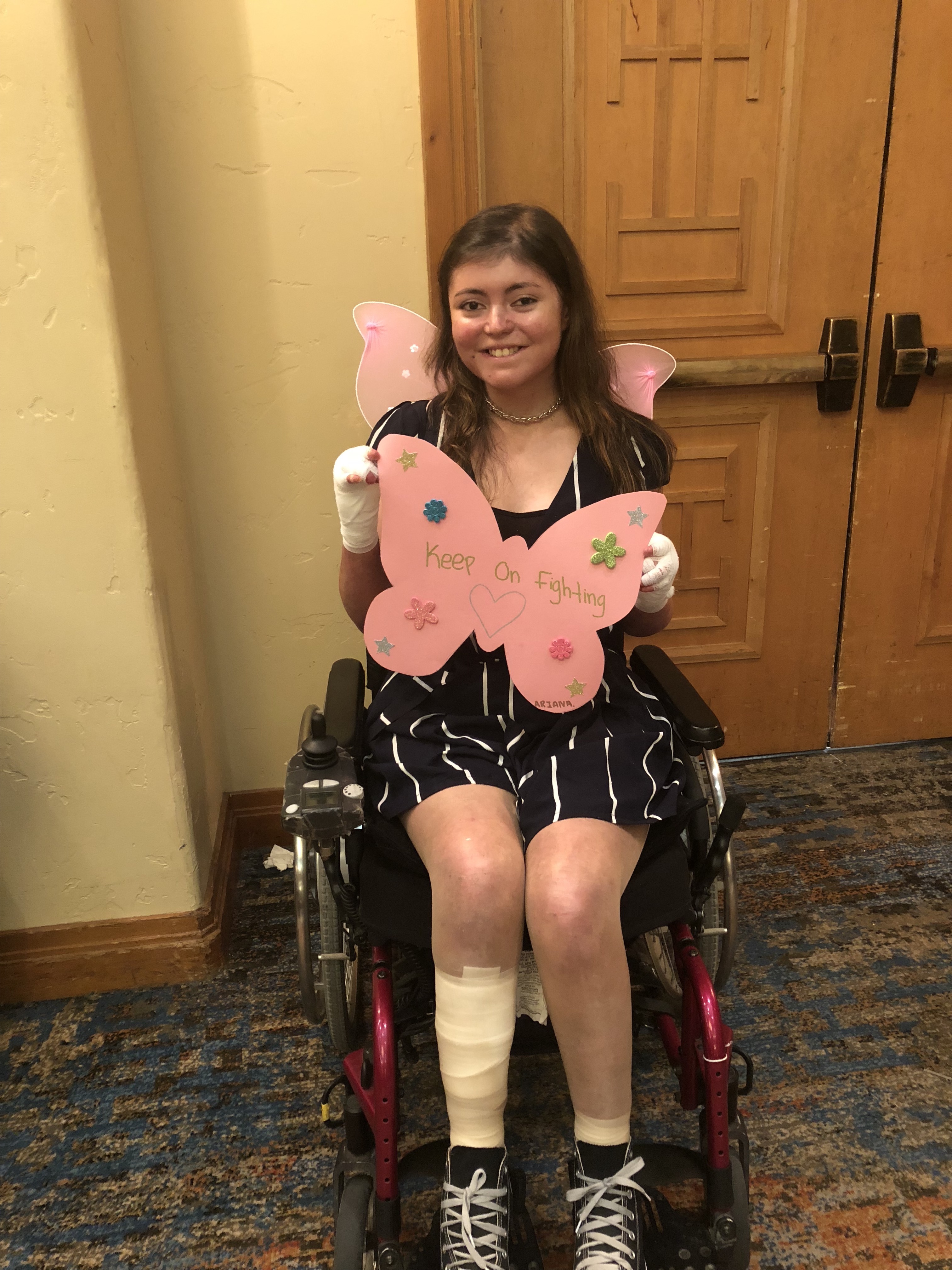 Image description: Ariana today. She sits in a wheelchair, smiling at the camera and holding a poster in the shape of a butterfly which reads "Keep on Fighting."

In a few months I’ll be starting my third year of university and thankfully, my last two years have quelled most of my fears. People have been more than accepting. I have learned that people in college are adults who often have kids, jobs, and responsibilities of their own. They don’t have time to worry why I wear bandages. Through these experiences I have learned that the only acceptance I truly need is from myself.

I have yet to master all the challenges of the double life that I live. Having a chronic illness while being a college student is not easy. Sometimes I find myself writing essays while my mom is changing my feet bandages. Other times, I’m studying through my phone as I wait for my iron infusion to finish. I have been able to balance everything, but it has not been easy.

My family and I are very proud that I have continued my education despite my challenges.  I feel very proud of myself that I've kept my determination and fought to accomplish my dreams. I am the first person in my family to attend college, and I am one of the very few from the EB community who has attended a four year college.

To be honest, every day brings its challenges. It has been hard having to go through surgeries, treatments, and endless bandage changes while knowing that this will always be my life. I take comfort, however, from knowing that my determination and eagerness to complete college motivates other students to do the same, whether they have illnesses or not. ‍