When I was born, I suffered a stroke to the right side of my brain, caused by a lack of oxygen to the brain. Because of this stroke, I was left with Cerebral Palsy (CP), which caused paralysis all the way down the left side of my body affecting my arms, legs, and every muscle on my left side. Growing up, it was always difficult having CP because of the way I was seen by everyone else. I could talk and mentally function just like everyone else, but my inability to walk "normally" and run always drew looks.

I could talk and mentally function just like everyone else, but my inability to walk "normally" and run always drew looks.

It wasn’t until the Summer of 2015, when my mom was online looking at the Women’s World Cup going on, when she noticed a link to the Paralympic Cerebral Palsy World Championships going on at the time. It was then that she my dad looked into the team and sure enough, I qualified for it because of my stroke and CP. My dad reached out to Stuart Sharp, Head Coach of the United States Men’s Paralympic National Team, and eventually I was invited to my first National team camp out in Carson, California at the age of 13. It was there I met the most incredible people and heard more incredible stories. It was there I experienced the National team, but more importantly for me, I experienced fitting in and being "normal" for the first time. I was just like everyone else there and that was the most special thing for me, learning to not just accept who I am but, to embrace what I come from and go through every day.

Once I arrived home, my new goal in life was clear: I was going to play soccer for the USA and I wasn’t going to let anything stop that. I suffered multiple injuries through my training and playing over the course of the next year and a half, including a stress fracture in my back and foot. The worst injury came when I was ten days away from my next National team camp and severely hyperextended my knee in 9th grade during a high school game. I tore everything in my knee except my ACL (luckily).  I was out of action for 6 months. 3 days after the 6-month mark of my injury, I flew out for my second National team camp in Lakewood Ranch, Florida and I was beyond excited. After that camp, I was called into another camp two months later in Chicago IL. There I proved my passion for making the team and proved that I should be brought in for an International Camp in Santiago, Chile. 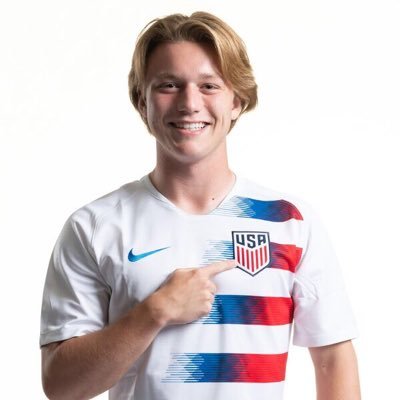 Once I arrived home, my new goal in life was clear: I was going to play soccer for the USA and I wasn’t going to let anything stop that.

Never in my wildest dreams would I have expected to get the call for that trip to Chile. Yet, two weeks later, there I was meeting up with the team getting ready to fly out to Chile. During this ten-day camp we played in two international friendlies where on the last night, on the last day, in the last minutes of the second game, I was subbed in and made my international Debut for the United States. This moment is incomparable to anything I have ever experienced and is easily the greatest moment of my life!

Being one of the youngest to ever debut for the team at 15 years and 3 months was surreal. It made my year and gave me the drive to always strive to be the best I can be. Upon returning home, I continued to give everything into the game I love more than anything. Working hard at home finally led to another camp invite from December 6th to December 12th. Upon coming home from this camp, I plan on fighting through my disability every day and working hard on joining the team again as my goal is to continue my National team journey for as long as possible.  I also want to inspire others and prove to kids (and anyone for that matter), that anything is possible with the right mindset and work ethic. I aim to be living proof.

I also want to inspire others and prove to kids (and anyone for that matter), that anything is possible with the right mindset and work ethic. I aim to be living proof.

Disability in the Workforce