An Interview with Isabella from @theanxietywarrior

Editor's Note: Today we are featuring a conversation between our editor Erin and Isabella from the popular Instagram and blog @theanxietywarrior. In this conversation, Isabella explains her experience being misdiagnosed for her seizure disorder because of her anxiety and depression. She also talks about how she started her Instagram and blog, and how helping others heal has helped her heal. This interview has been edited for clarity and length.

Isabella: A psychologist had recommended that I write about my anxiety and depression. I wanted to actually start writing  and Instagram was the easiest way that I could do it. I was always on public transport so I could just get out of my phone and that was easier than getting a journal and putting pen to paper. So it started as a private Instagram account for me.

Erin: Can you tell us about being misdiagnosed when you were having seizures? It's actually been a problem for hundreds of years that women are often misdiagnosed--either their mental health issues aren't taken seriously enough or their physical problems are misdiagnosed and diminished as simply "mental illness." It's pretty amazing to me that your doctors could have missed a seizure disorder because of anxiety. It's actually quite scary to know that that sort of thing is still happening

Isabella: Yeah. It kind of started because I already had anxiety and depression. I was seeing a psychologist and they knew my background. I started having what I didn’t know at the time were seizures, kind of mini seizures, and they were happening during the night and eventually during the day which became pretty dangerous. You know, sometimes I’d be driving and this would happen. So eventually I mentioned it to a psychologist and because the way I described it sounded to them really similar to a panic attack, they just kind of assumed that was what it was. They would always say “You know you’ve got anxiety, it’s common that you’re going to have panic attacks. So that’s what’s happening.” I was describing my experience as kind of similar symptoms--I would get a wave of nausea, I would shake a bit, feel lightheaded and all of that, but I would say to them “I know what a panic attack feels like, I’ve had many of them in my life, this feels more physiological rather than psychological. And I know that something different is happening here.”

Erin: What happened next?

Isabella: I can’t even tell you have many doctors, psychologists, and psychiatrists I have seen. What was happening didn’t start to become clear wasn’t until my twenty-first birthday. That night I went to bed and I woke up with paramedics in my face. They asked me if I knew what happened, if I knew where I was. They told me that I’d had a seizure- a big seizure- I wasn’t conscious, I was frothing at the mouth, it was a full blown seizure. That’s when I went into hospital and started doing proper tests. But even though I did that there was still no answer to what is was. Finally they were able to say all this time “you were having seizures,” but still they could never tell me what caused it. It was a relief but it was also really frustrating having to tell so many professionals what was happening to me and not being believed.

It’s a shame that it had to take years to figure out what was happening and to see the right doctor to get a correct diagnosis. That was the most frustrating thing for me. Because I wasn’t diagnosed for those mini seizures, eventually when I started having bigger seizures, they caused me to have memory loss. I lost six months to a year of my memory. I can’t remember the year before my 21st birthday. That was a shock for me, to deal with memory loss. And that happened because I had that bigger seizure. Had my condition been picked up earlier and had I been put on the right medication, that would have been controlled earlier, that serious seizure wouldn’t have happened, and I wouldn’t have had that serious memory loss.

Erin: I noticed on your Instagram page that you use humor a lot when you discuss depression and anxiety.  Where does that come from and how do people react to it?

Isabella: Some people look at my site and they say “you’re so negative.” It depends who you talk to and everyone has different opinions. Some people won’t think my sense of humor is very funny. Personally, though, that’s how I deal with my experience, and that’s what helps me. I’d rather laugh something off. A lot of the time what I’m showing on the page and the blog is just raw honesty. If something sucks, I’m going to say it sucks and I’m going to swear about it. Though there are some people who don’t think it’s funny, I think my humor is also one of the reasons a lot of people connected to my Instagram account. They related to it and had a laugh about the hard stuff.

Erin: One thing that I know can be really difficult with depression and anxiety is when you feel like you’re having a relapse. How do you deal with that?

Isabella: That’s probably the hardest thing for me. Anxiety and depression is really like you have one amazing day and the next day you feel horrible. Or for me sometimes I’ll have one great hour and then the rest of the day is just a mess. I find that really hard because sometimes I feel like I’m getting better in a sense--I don’t think you can ever really cure anxiety and depression--but some days I feel a sense of achievement where I can see that I’ve improved, for instance when I’ve faced something tough and dealt with it well.  So I get a sense of achievement from that, but then I’ll go through a similar experience and I deal with it how I used to, and that is really hard for me to deal with. It feels harder than those experiences did in the first place, somehow. It’s like I get even more down when that happens because I feel like I’ve done really well and then suddenly I feel like I took two steps back and I wonder if I ever improved at all.

Everything that’s going on at the moment [with the COVID pandemic] makes it even harder because you’re in a completely new situation and each day’s different. You don’t know how you’re going to react. You’re facing new challenges every day.

Erin: I really respect how you use honesty. Sometimes I think it can be a little unrealistic to tell a narrative in which you always make progress with mental health. What are your thoughts about that?

Isabella: I see a lot of those narratives and I don’t understand them. On Instagram sometimes I worry that people just put out the best of themselves. I think probably those people do still have depression or anxiety, but they’re not showing that part of the experience. I don’t really think you can “cure” anxiety or depression. I think that’s part of the reason why people have related to me. Not often at all do I really say “I did it! I succeeded.” I’m just being completely honest. If something goes great I‘ll say that, but I’m not going to hide the challenges. It’s just kind of unrealistic and I personally don’t find that helpful.

Erin: I actually think we can show strength when we show that we’re struggling. Day by day, it might seem kind of negative to be super honest, but when you see that someone is surviving that difficulty every day, you realize, “Hey, I can do that too.” I think that can actually really empower people.

Isabella: Yeah. I’ve been really big on the message: “You’re not alone.” I’ve found that that has been great for people. When I describe my experiences, sometimes my followers say to me, “I thought I was the only person who ever experienced that.” Even if it’s something super specific that I’m talking about, like explaining a really tiny thing that triggers my anxiety. People respond to those posts saying things like, “Oh my God, I thought I was the only one!” or “Me too, who would have thought we’d both feel this way?” They don’t think that anyone else feels what they are feeling.

Erin: One of the things about anxiety and depression is that they make you feel alone. You believe that you’re the only person who has had this self-destructive thought or worry.

Isabella: Exactly. Having the page has helped me because I always had that thought as well, that I was the only one going through it. I think it’s an actual scientific fact that people with depression and anxiety think they are superhuman, that they’re the only person who has had their experiences, and that no treatments will work for them. I used to think like that. I’d look at a treatment and say, “That’s great that it worked for someone else, but it will never work for me.” But my Instagram page really helped me as much as it has helped other people, because I’ve realized that I’m not alone too. It’s a two way street with support.

Erin: It’s pretty amazing. By helping other people heal, you’re also healing yourself! In conclusion, what advice do you have for our readers?

And one more thing. If you’re looking for help, don’t do an internet search! Find a Facebook group about the topic or an Instagram account that you relate to and message those people or that person. Internet searches, in my experience, just make you more anxious. Reach out to me or someone else who talks about mental health and ask them for advice about what you’re experiencing. They’ll most likely be receptive to you.

I didn’t really find anyone to talk to and I ended up in the hospital before anyone took my condition seriously. So I hope others will reach out and message people in their community before they get to that point. 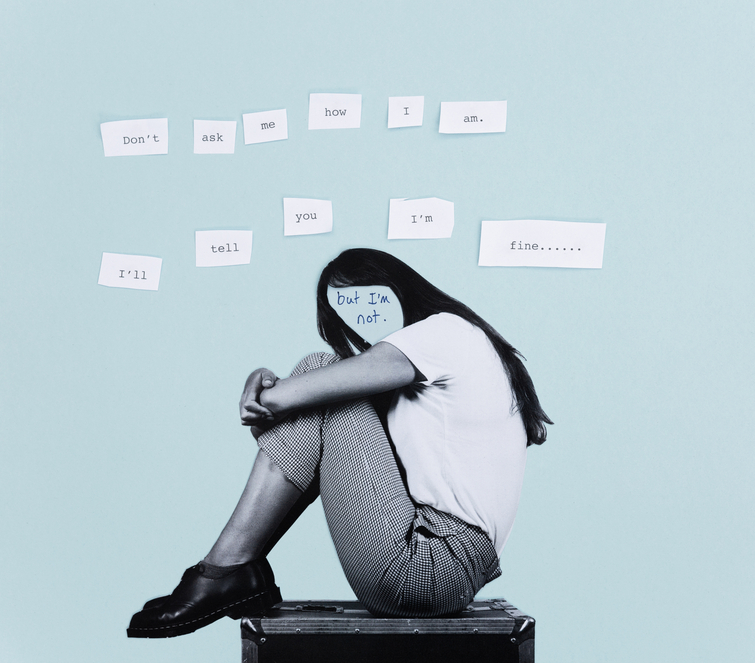 Image Description: A woman sits in front of a blue background. Her face is cut out of the image, as in a collage. The text reads: "Don't ask me how I am; I'll tell you I am fine, but I'm not."

When a Loved One has COVID-19