Our son Levi had a stroke in utero that affects his right side.  We didn’t figure it out until he was about six months old, and we had no idea what it would mean for him or for us.  Would he walk?  Would he talk?  Would he be able to find his way in the world?

Looking at Levi today, at 10 years old, those fears seems overly dramatic and unfounded because he has grown into such a wonderful, capable, engaging human being. Nonetheless, when he was just a blob of an infant the future was downright terrifying.  We were scared for his well-being and, to be honest, we were petrified by what the new responsibility of raising him would entail.  We had never considered the possibility of having a child with a difference (as Alexandra, founder of Different and Able, so wonderfully puts it), and we felt completely unprepared.

So we threw ourselves into it with everything we had.  We didn’t like the doctors we met in New York, so we took him up to Boston Children’s Hospital every other month. He had constant physical therapy, occupational therapy, and eventually speech therapy – as many as eleven sessions of therapy per week at one point – and tried every brace, every stretch and every everything we could.

Levi took his time crawling and walking, but he made nice progress right from the start.  There were moments that were terrifying (the first time he had a seizure) and demoralizing (when we learned his feet were bending in the wrong direction because his calf muscles were too tight), but as time passed, we grew more confident that Levi would not only be okay, but would thrive.

What gave us that confidence?  Levi was born with the perfect disposition for overcoming adversity: he’s interminably happy and he just won’t give up.  Yes, he has his darker moments like the rest of us.  And, yes, he gets frustrated too.  But there is a positivity and a perseverance in him that goes beyond luck and borders on the spiritual: he was born with more challenges than most of us, and he was born with the personality to embrace them.

That doesn’t mean we kicked back and let him figure out his own way in the world.  Quite the opposite, his mother and I have – like most parents of different kids – done everything in our power to give Levi the best support possible. Sometimes that meant spending weeks away during the summer at special intensive therapies.  Sometimes that meant participating in special clinical trials for new PT or OT therapies.  And sometimes that meant NOT stepping in to help, even when it felt like he might need it most.

We decided early on that there were some important skills we wanted Levi to learn that we knew would be challenging.  One was riding a bike, another was skiing and another was learning to swim.  To help him figure out these new skills, we decided to let him fail.  In reality, I’m the one who let him fail, because his mother could never bear to participate or even watch.  It wasn’t easy.  As a three year old, I plopped him in a pool and told him to start kicking.  One little leg would jump into action, and the other would stay silent.  Gradually, I’d take my hands away, encouraging, begging, admonishing the right leg to start kicking too, and Levi would sink down under the water.  At first he was surprised I let him sink and then, coughing and sputtering, he became upset at me for letting go, but then, one day, that right leg gave a kick.  And once it gave a kick, it gave another.  And before we knew it, Levi could swim.

I’m guessing I don’t need to go into details for you to imagine how Levi learned to ride a bike.  Needless to say, it involved many scratches and tears, but thankfully no broken bones.  He learned to hold on to the handle bars with his right hand; he learned to pedal consistently and strongly; he learned to mount the bike, put his foot in the toe clips and start up; and he learned to pull his foot back out and dismount at the end of a ride.

Skiing was the biggest hurdle, and we enlisted the help of many, many wonderful adaptive ski instructors, but last winter Levi skied his first true black diamond slope.  He was exhausted and exhilarated at the same time.

So why then, if I was such a pushy father, did I hold Levi back from soccer?

Because I was scared it would simply hurt too much emotionally for him to struggle on the field.

Oh, how wrong I was.

One fall day about four years ago, Levi and I were taking a walk through the woods. Suddenly, out of nowhere he said:

“Papa, I know I will be the worst kid on the team, but I want to play soccer.  Can I play soccer?”

It was already three weeks into the season, and we’d avoided telling him about it on purpose.  He had asked about soccer several months earlier, and my wife and I had decided soccer was just too challenging for Levi.  His gait was awkward, he tripped and fell often, and he could hardly run.  We thought we’d be setting him up to fail.

But standing there in the woods, looking into Levi’s eager face, I thought to myself: who am I to tell him he can’t play soccer?  So I told him yes.

Right off the bat, it was clear Levi was better than I’d anticipated.  He was fearless.  He bravely charged the ball as a defender and quickly earned a reputation among his teammates as dependable.  He was slower than the other kids, but started running more than he ever had before.  His stride opened up, his thighs thickened, and he fell spontaneously much less often.  Soccer was healing his body.

He stayed primarily in defense his second year, but because they started playing on full fields, his speed became a larger disadvantage.  I was the coach that year, and started playing him up as a striker, hoping he could get a loose ball up near the goal and put in a shot.  This new position became demoralizing for Levi, however, because the other kids rarely passed him the ball.  All kids his age had poor ball control, but with only one foot that could really dribble, his was markedly worse.  By the end of the year, he was often a puddle – he was the only striker who hadn’t ever scored a goal.

The third year, Levi played striker exclusively.  He still never got one goal, but there were no more tears. 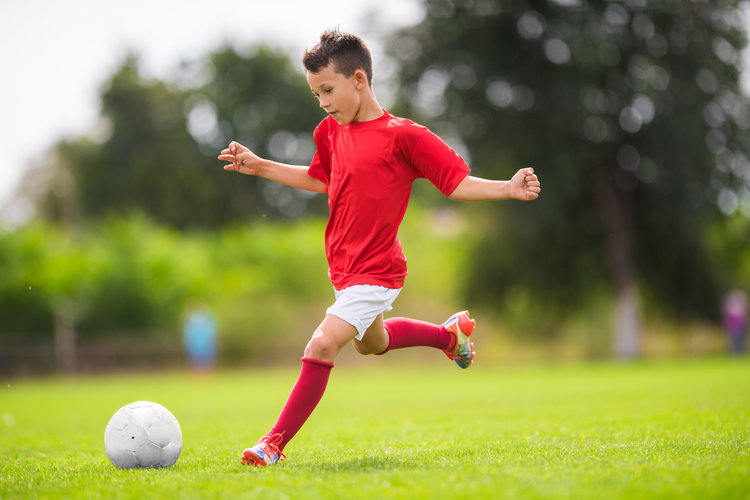 Last spring, my wife and I were trying to find a way for Levi to continue playing soccer competitively, but with kids more closely aligned to his ability.  We discovered that the qualifications for Paralympic soccer are brain injury of some sort – Cerebral Palsy, Stroke or Traumatic Brain Injury.  “Wow!  That’s perfect!” we thought.  We reached out to the coach of the US National Paralympic Team, Stuart Sharpe.  We wanted to know if there were camps or local teams of kids like Levi that he could join.  What he told us shocked us: every other developed country in the world has a feeder system of leagues and programs that feed up into a national Paralympic team – except the US!  In the US, there is nothing.

So, we decided to create it!  At the end of September we held the first ever CP Soccer practice in the US (to our knowledge).  We had 11 participants, all with some form of CP, stroke or TBI.  It was amazing – we couldn’t get the kids off the field at the end.  If you're interested in learning more, please check out www.cpsoccer.us and send us a note.  We are hoping to build out a national network of teams.

Raising a kid with hemiplegia isn’t easy, but it is incredibly rewarding.  Two weekends ago, Levi scored his first ever goal with his able-bodied soccer team.  He was thrilled.  We pushed him to swim, bike and ski, but it was his own passion that drove him to play soccer.  It was a good lesson for us as parents – to listen to Levi, to include him in planning how he spends his time, and – most importantly – to never, ever pre-judge what he can and cannot do.

We are constantly inspired by Levi, and could not be more proud of him.