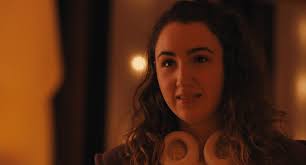 Written, directed, and produced by Cooper Raiff, Cha Cha Real Smooth is a story about love and transformation. In the film, Andrew (Raiff) works as a bar/bat mitzvah party host and strikes up a unique friendship with Domino (Johnson), a single mother, and her teenage daughter who has autism, Lola (Burghardt). Starring alongside other talented actors, Dakota Johnson, Leslie Mann, Evan Assante, and Brad Garrett, newcomer Vanessa Burghart makes her exciting and passionate screen debut.

Like the character of Lola, Burghardt also has autism. Burghardt was able to provide an authentic representation of those who are neurodiverse. During production, Burghardt was able to direct and modify the script to model how Lola, being autistic, would feel in social situations and how Lola would respond to things around her. Burghardt states, “Lola’s a lot like me. She’s kind of like me if I were younger, if I hadn’t gone to public school at a young age. She’s not very socially informed, but is like a fully formed person, and I really like that about her, because that’s really rare from what I’ve auditioned for and what I’ve seen. So, I kind of connected with her right away.”

Since she was eleven, Burghardt has had a single focus on becoming an actress. She acted in school plays and did community theater, trained with an acting coach, and went to a vocational school for acting. Burghardt is now a teenager and is focusing her sights on other auditions and how she wants to portray all types of people in film, not just those with autism.

Back to School Tips to Help Children with Special Needs

What is Obessive Compulsive Disorder (OCD)?