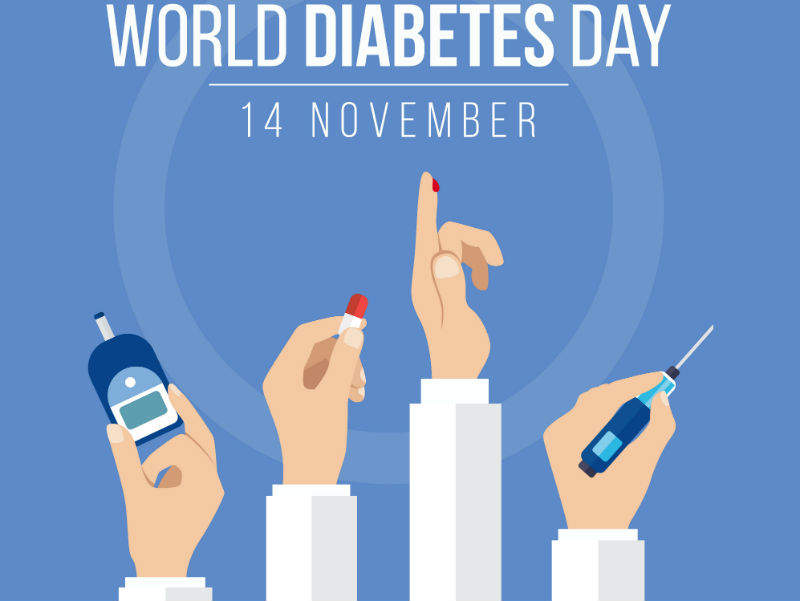 To increase awareness and accessibility to all, Different & Able recognizes the efforts, resources, and advocacy of World Diabetes Day. The theme for today and until 2023, is “Access to diabetes care;” a majority of people still do not have access to diagnostics, medicines, and monitoring devices that can help with diabetes management.

Published by the World Health Organization on November 10, 2021 Diabetes (who.int)

Diabetes is a chronic disease that occurs either when the pancreas does not produce enough insulin or when the body cannot effectively use the insulin it produces. Insulin is a hormone that regulates blood sugar. Hyperglycemia, or raised blood sugar, is a common effect of uncontrolled diabetes and over time leads to serious damage to many of the body's systems, especially the nerves and blood vessels.

By contrast, the probability of dying from any one of the four main noncommunicable diseases (cardiovascular diseases, cancer, chronic respiratory diseases or diabetes) between the ages of 30 and 70 decreased by 18% globally between 2000 and 2016.

Type 2 diabetes (formerly called non-insulin-dependent, or adult-onset) results from the body’s ineffective use of insulin. More than 95% of people with diabetes have type 2 diabetes. This type of diabetes is largely the result of excess body weight and physical inactivity.

Symptoms may be similar to those of type 1 diabetes but are often less marked. As a result, the disease may be diagnosed several years after onset, after complications have already arisen.

Until recently, this type of diabetes was seen only in adults but it is now also occurring increasingly frequently in children.

Type 1 diabetes (previously known as insulin-dependent, juvenile or childhood-onset) is characterized by deficient insulin production and requires daily administration of insulin. In 2017 there were 9 million people with type 1 diabetes; the majority of them live in high-income countries. Neither its cause nor the means to prevent it are known.

Gestational diabetes is diagnosed through prenatal screening, rather than through reported symptoms.

Impaired glucose tolerance (IGT) and impaired fasting glycaemia (IFG) are intermediate conditions in the transition between normality and diabetes. People with IGT or IFG are at high risk of progressing to type 2 diabetes, although this is not inevitable.

Over time, diabetes can damage the heart, blood vessels, eyes, kidneys, and nerves.

Simple lifestyle measures have been shown to be effective in preventing or delaying the onset of type 2 diabetes. To help prevent type 2 diabetes and its complications, people should:

Early diagnosis can be accomplished through relatively inexpensive testing of blood sugar.

Treatment of diabetes involves diet and physical activity along with lowering of blood glucose and the levels of other known risk factors that damage blood vessels. Tobacco use cessation is also important to avoid complications.

Interventions that are both cost-saving and feasible in low- and middle-income countries include:

Other cost saving interventions include:

WHO aims to stimulate and support the adoption of effective measures for the surveillance, prevention and control of diabetes and its complications, particularly in low- and middle-income countries. To this end, WHO:

The WHO Global report on diabetes provides an overview of the diabetes burden, interventions available to prevent and manage diabetes, and recommendations for governments, individuals, the civil society and the private sector.

The WHO module on diagnosis and management of type 2 diabetes brings together guidance on diagnosis, classification and management of type 2 diabetes in one document. The module is for policy-makers who plan service delivery of diabetes care, national program managers responsible for training, planning and monitoring service delivery, and facility managers and primary care staff involved in clinical care and monitoring processes and outcomes of diabetes care.

In April 2021 WHO launched the Global Diabetes Compact, a global initiative aiming for sustained improvements in diabetes prevention and care, with a particular focus on supporting low- and middle-income countries. The Compact is bringing together national governments, UN organizations, nongovernmental organizations, private sector entities, academic institutions, and philanthropic foundations, people living with diabetes, and international donors to work on a shared vision of reducing the risk of diabetes and ensuring that all people who are diagnosed with diabetes have access to equitable, comprehensive, affordable and quality treatment and care.

In May 2021, the World Health Assembly agreed a Resolution on strengthening prevention and control of diabetes. It recommends action in areas including increasing access to insulin; promoting convergence and harmonization of regulatory requirements for insulin and other medicines and health products for the treatment of diabetes; and assessing the feasibility and potential value of establishing a web-based tool to share information relevant to the transparency of markets for diabetes medicines and health products.

(2) Causes of blindness and vision impairment in 2020 and trends over 30 years, and prevalence of avoidable blindness in relation to VISION 2020: the Right to Sight: an analysis for the Global Burden of Disease Study GBD 2019 Blindness and Vision Impairment Collaborators* on behalf of the Vision Loss Expert Group of the Global Burden of Disease Study† Lancet Global Health 2021;9:e141-e160.